In November of 1960, a highly select group of physical scientists and engineers made its way to the remote hills of West Virginia for a small informal conference. The meeting was convened in Green Bank under the auspices of the National Academy of Science, to discuss a question that was only just gaining scientific respectability: what are the prospects of establishing contact with other worlds? It is a measure of just how risky the topic was considered, that it was decided not to announce the conference, and no official publication followed the meeting. 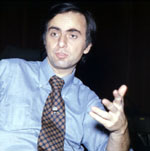 The conference was organized by J.P.T. Pearman of the Science Board of the National Academy of Science. The other ten attendees included Dana Atcheley, president of Microwave Associates, who donated the parametric amplifier to Project Ozma; Melvin Calvin, a world renowned biochemist who studied the origins of life; Bernard Oliver, Vice President for Research and Development at Hewlett-Packard; Carl Sagan, then a young astronomer at Cornell; Phillip Morrison, author with Giuseppe Cocconi of the Nature article which launched modern SETI; Giuseppe Cocconi; Frank Drake, of Ozma Project fame; Su Shu Huang, astronomer and expert on extrasolar planets, and his former teacher, Otto Struve, director of the Green Bank observatory and host of the conference; and John Lilly, who had recently published his controversial Man and Dolphin arguing that dolphins are an intelligent species. It was in a jesting tribute to Lilly's celebrated work that the conference attendees styled themselves "The Order of the Dolphins."

For the development of SETI, the meeting was a momentous event. For the first time, the possibility of communication with alien civilizations was being seriously discussed by some of the world's most prominent scientists. So prominent, in fact, that one of them, Melvin Calvin, was awarded the Nobel Prize in Chemistry during the course of the conference. "It was wonderful," Sagan recalled in a 1993 interview, " . . . these good scientists all saying that it wasn't nonsense to think about the subject. There was such a heady sense in the air that finally we've penetrated the ridicule barrier . . . It was like this 180 degree flip of this dark secret, this embarrassment. It suddenly became respectable."