The Green Bank meeting was also remarkable because it featured the first use of the famous formula that came to be known as the "Drake Equation". When Drake came up with this formula, he had no notion that it would become a staple of SETI theorists for decades to come. In fact, he thought of it as an organizational tool - a way to order the different issues to be discussed at the Green Bank conference, and bring them to bear on the central question of intelligent life in the universe.

The grand question of the number of communicating civilizations in our galaxy could, in Drake's view, be reduced to seven smaller issues:


Denoting the number of communicating civilization in our galaxy by N, and multiplying the different elements, we get the famous Drake Equation: 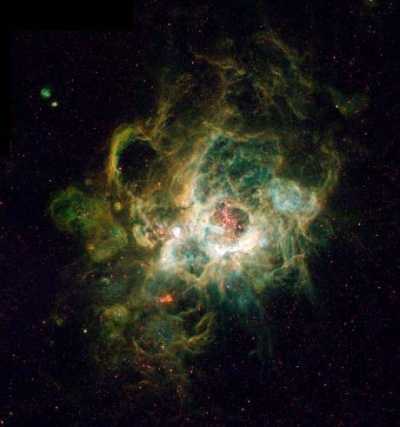 The equation served its purpose well at the Green Bank conference. It provided a framework that enabled the different researchers, who had very different backgrounds and specialties, draw upon their specialized knowledge, and at the same time contribute to the general question of the meeting.

Soon, however, to Drake's surprise, it became much more than that. The short mathematical formula proved irresistible to SETI promoters: it reduced a huge and almost unmanageable speculative question to a neat series of seemingly specific questions. While the larger question seemed too large and speculative, its seven components appeared to lend themselves to scientific inquiry. No less important, posed as a formula, the question seemed mathematical and quantitative. What better way of gaining scientific respectability than formulating a mathematical equation?

The Green Bank meeting weighed in on each of the elements in the equation, and came up with generally optimistic estimates. The rate of star formation (R*) was the only element in the equation about which some reliable information existed, and the conference settled on a conservative estimate of about one star per year. Otto Struve was the resident expert on extrasolar planets (fp), and he suggested that planets orbiting distant stars were, in fact, very common. Su-Shu Huang gave an optimistic assessment about the likelihood of planets having life supporting environments (ne), and Calvin and Sagan suggested that on suitable planets life would ultimately emerge (fl). Lilly gave an optimistic assessment on the likelihood of intelligence emerging on a life-bearing planet (fi), based on his work on dolphins. If at least two intelligent species emerged on Earth, doesn't that suggest that intelligence is common? Lilly's views, however, were highly controversial, and often dismissed by mainstream biologists. Even the sympathetic audience at Green Bank was quick to note that dolphins were not a technological species, and would be unlikely to send radio beams into space.

The final two elements in the equation were in the field of social science: how likely are intelligent beings to communicate with other civilizations (fc), and how long do civilizations last (L)? Significantly, there were no social scientists at Green Bank. But while lamenting their absence, Morrison also pointed out that even specialists were unlikely to have the answers for such grand questions. In their absence, he suggested that based on Earthly experience civilizations were likely to develop advanced technology, and that curiosity and the urge to communicate appear to be universal. Furthermore, he suggested, if civilizations are able to overcome the dangers of nuclear self-destruction, they can probably sustain themselves for very long periods of time.

In summarizing their discussions, the conference members concluded that the number of communicating planets could range from fewer than 1000 to more than a billion. Most of them thought the higher number a more likely estimate. On this basis they called for a vigorous radio search for extraterrestrial intelligence, using a 300-foot dish, very large computers, and patience to search for at least 30 years.